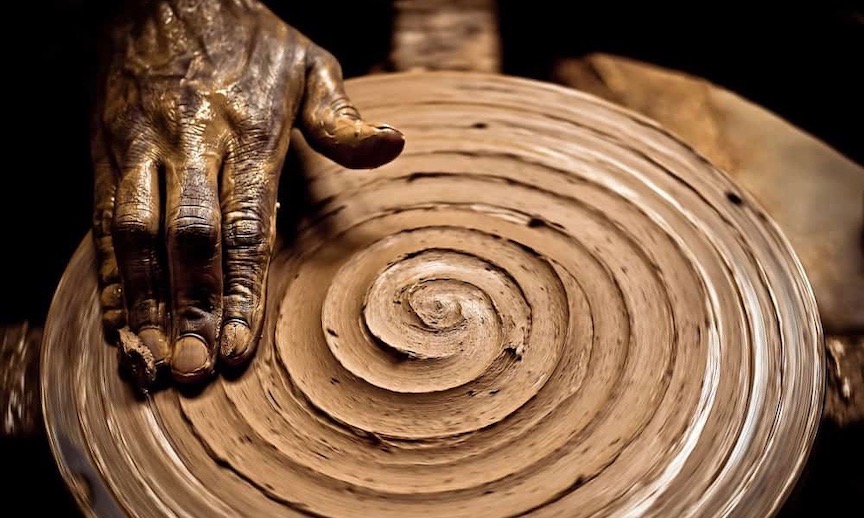 I got the word “undone” stuck in my head, and now I can’t shake it. Undone seems to be in the air these days.

A conversation with Travis is what started me off. We were talking about this complicated, multi-step project on which he’s been working for weeks. He was doing it according to his usual method: procrastinating for as long as possible, full of dread the entire time, then crashing into deadlines again and again, but never getting it all done. It drives me nuts.

I’m inordinately self-satisfied with my mastery of to-do lists. I get shit done. So, I suggested that it might behoove him to adjust his idea of what it means to be “done” with something. I was thinking that it would be less frustrating if he could dissect the job down into manageable, daily tasks. These he then could dispatch with ease! Thus, he’d feel complete at the end of every day, rather than leaving the entire unwieldy thing hanging over his head for weeks-months-years.

I told him, “I’d be crazed with anxiety, I’d never sleep, if I went to bed with my work undone.”

He muttered (somewhat defensively, I thought), “Well, I guess I’m more comfortable than you are with that kind of ambiguity.”

I shot back, “No, you’re just more comfortable with suffering.”

That seemed darned clever when I said it. But I’ve been gnawing on it for a while, and now I suspect that it illuminates more about my own neurotic relationship to productivity than it does about how Travis minds his. It’s pretty messed up, now that I think about it, to equate “undone” with “suffering.”

Also, it’s pretty hard to reconcile this equation with my belief that personal fulfillment always is in the process — life is a journey not a destination. I totally subscribe to that: the process itself should be a joy. But process by definition means that things aren’t all done, right? So if I’m making “undone” mean “suffering,” that’s probably going to leech a lot of joy out of it right up front.

Have I reduced the beautiful journey of my life into a series of undone tasks to be suffered over until they can be crossed off my list? An arbitrary list. A list that I made up to give myself a temporary boost of satisfaction when I finish it, but the very existence of which tends to destroy my peace before I’ve even begun. Ugh. We humans are funny.

(To be clear, I’m not advocating Travis’s approach either. Procrastination ensures fairly relentless suffering; at least my method invites brief moments of accomplishment amidst the anguish.)

Anyway, I’m trying to untangle myself from this unconscious suffering over things undone. It’s fairly obsessive and compulsive, is what it is.

I’m also wondering about the very idea of “undone” — is that even real, or is it just an experience resulting from not being present?

I mean, just because something hasn’t been finished — a project, a plan, a vision, a life — surely that doesn’t mean that it’s not complete. Maybe all the ways it is and isn’t totally realized is exactly as complete as it needs to be right now. Some things aren’t done because they’re still happening. Others aren’t done because it hasn’t yet been the time to do them. The entire grand scheme of Everything into Infinity is not done and won’t ever be done. That leaves a heck of a lot of to-do lists. And it’d probably be best not to anticipate it all as an endless stream of torment.

The word “undone” sometimes also gets used to describe when something once put together subsequently falls apart. When a tidy package comes untied, or a strap of clothing breaks, or the best-laid plans go awry — it’s come undone. Or it can refer to temperament, losing one’s cool or one’s composure — I’ve come undone.

The notion that something complete could regress or revert to something incomplete, my god, that’s like a living nightmare to me. SO I AM GOING TO DISAVOW IT RIGHT NOW. I acknowledge and embrace the perpetual change of everything. Life grows and moves, resolves and dissolves. But I reject the notion that this could ever, in any way, be an “undoing.” Life evolves forward. Everything urges towards its own fullness, never back or away from it.

This includes our identities and our undertakings. It includes our self-concept as well as the great works of our life. It includes the communities and the societies of which we are integral (whole, complete, and perfect) parts. It goes for everything that we’re dealing with during this messed-up year — decay, upheaval, tribulation, and uprising.

It’s not undone — it’s happening right now. It has not come undone— it is growing forth into everything yet to be. And we will not be undone by it — we are spiraling into the center of Life Itself, forever in our own time and always as our own wholeness.

Join us online this week for my talk, music by Patty Stephens, and some sweet singalongs. New content is available every Saturday at 6:00 pm (and on-demand forever after) at BOSQUECSL.ORG, VIMEO, and FACEBOOK. Have a great week, Beloved Ones. XO, Drew