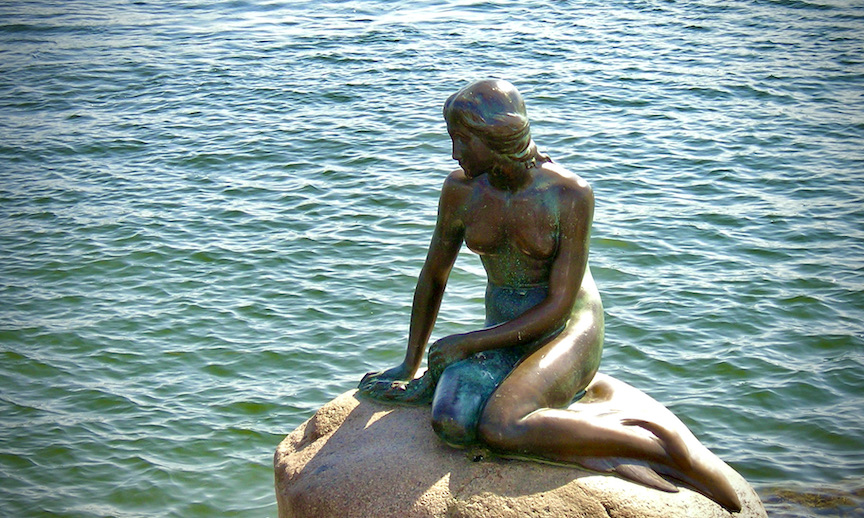 “Chaos is a friend of mine.”

I was listening to Malcolm Gladwell’s podcast a few weeks ago, a series of episodes in which he deconstructs Disney’s adaptation of Hans Christian Andersen’s “The Little Mermaid.” Gladwell and some thoughtful academics shred to ribbons the beloved 1989 feature.

All of the guests acknowledge both how much they love the movie as well as how troubling they find it. I completely understand their ambivalence. It’s got problems on a lot of levels.

I’ve never been a huge Disney fan, but I was pretty gaga for this film. I don’t remember how I happened to see it as a 19-year-old college student; it really doesn’t seem like something I would’ve been into then. But for some reason I did go see it at the theater, and it was at exactly the right moment, and I was utterly captivated.

Maybe because it coincided precisely with my coming-out, and I identified with Ariel’s desire for transformation and forbidden romance and broadened horizons. Certainly, part of it was the enchanting performance of Pat Carroll as Ursula the Sea Witch. Probably a big element was just my intense crush on the handsomely-animated Prince Eric.

The podcast picks away at the story from several angles, especially the way it handles — mishandles — the theme of female agency. Spunky, curious, adventuresome mermaid Ariel barters her beautiful, powerful voice for the chance to walk on land in hope of winning Eric’s heart. She spends the latter two-thirds of the movie batting her eyes witlessly. Ultimately, she gets rescued by men, boyfriend and Daddy, who impale Ursula to death. [Paging Dr. Freud!]

One of the most interesting parts of the discussion, for me, was about the function and history of fairy tales, generally. I knew that most modern versions of popular fairy tales had been toned-down and sanitized. I didn’t know that the main shift in this direction happened in 17th- and 18th-century Europe. I usually think of the Brothers Grimm renditions as the edgy originals, but no. The Grimms, in fact, sublimated a lot of the bloody pandemonium out of these ancient stories, cleaning them up for a society that wished to emphasize harmony and natural orderliness.

It was during the Enlightenment that fairy tales became predominantly parables, stories conveying a strong moral or ethical ideal. Specifically, they came to impart the principle of “poetic justice” — the tidy frame in which the good are rewarded and the wicked are punished. Of course, that wasn’t an entirely new idea. But prior to the enlightenment, most folk and fairy tales described a much wilder world. Passed down through the generations in an oral tradition, these stories had depicted not morality and order, but rather chaos and unpredictable twists of fate. They showed a world in which bad things happen to good people and in which evil sometimes lucks out.

For example, in some of the earliest versions of the Cinderella story, the titular heroine murders her first step-mother because she prefers that her father marry his housekeeper; though things go south for a while, ultimately she is rewarded with happily ever after.   In the original Sleeping Beauty, the princess is awakened not by the kiss of her one true love, but by the shrieking twin infants to whom she’s given birth after being raped while unconscious.  Holy shit.  Hans Christian Andersen retained some of the pre-Enlightenment’s cruel and fickle fatalism in his Little Mermaid, in which she doesn’t get the guy, and ends up miserable and alone, dissolving into sea foam.  Thank goodness Disney changed that!  It makes me weepy just to imagine.

I appreciate a happy ending as much as the next person. I yearn for justice. I want to believe in a world in which good deeds, good thoughts, and good intentions are rewarded. Nevertheless, I think there’s also something valuable for us in acceptance of a disorderly world. What if we untangled ourselves from some of those themes of reward and punishment altogether…?

Studies have explored how kids engage with different types of stories. [I’m trying really hard not to picture a horrifying laboratory run by cartoon executives and sugary cereal marketers, a underground facility full of children wearing goggles and electrodes to measure their eye-movements and vital signs as they’re forced to watch hours of television.] However they study it, what they’ve found is: while children may find stories of poetic justice satisfying, they are in fact more compelled by stories with a disorderly twist. As children (and later, grownups) identify with characters in a story, they are better able to relate to those who are trying to navigate an un-just world.

I’m not discounting entirely the notion of divine order. But I think we might embrace, as well, some Divine Chaos.

Because bad things do happen to good people. All the time. If we become too invested, emotionally and psychologically, in the idea of good-creates-good and bad-begets-bad, then what does that say about us when something horrible happens?

Yes, we have a lot of creative latitude in how we construct our lives, make meaning for ourselves, and build the world together. I believe in all of that — the power of our word, the generative juice of our thoughts and beliefs and certainly of our actions. I truly believe that there’s nothing we can’t create if we set our hearts and minds to it.

AND creation is quite different from control. We might even call it the opposite of control.

I expect that we’d all have an easier time with things if we could be less hung up on how we think it’s all supposed to unfold. Let us declare our intentions, practice our creative empowerment, name and claim our good — do all of that, by all means, and — AND — leave lots of wiggle room for chaos. For the unexpected, for surprising twists, “good” and “bad.” There are 7 billion other people on the planet, for heaven’s sake. And trillions of other living creatures. And the earth itself is doing its own wobble and dance. We can’t really control much of that. Pretending that we can is a fool’s errand that sets us up for anxiety and despair about how we’re managing our lives all wrong.

Nietzsche wrote, “You need chaos in your soul to give birth to a dancing star.”

Perhaps we could think about our creativity in a way that was much less about control and a lot more about participation and engagement. Less about imposing order and more about responding thoughtfully with an open heart. Less punishment, more loving rehabilitation. Less about a codified set of principles that promise to make sense of the senseless and more about embracing the possibility that only exists in the wild unknown. In Divine Chaos.

I can’t wait to be with you this Sunday, August 22, at 10:00 am at Maple Street Dance Space. We’re fully masked for indoor gatherings. If you’re not able to join us in person, you can find my talk online at bosquecsl.org on Sunday evenings. XO, Drew

Why can’t you trust atoms? Because they make up everything. It’s a silly joke, maybe…

MY CIRCUS, MY MONKEYS

A few years ago, a Polish proverb hit social media. This saying was everywhere all…

The yellow brick road starts our as a spiral in the movie, The Wizard of…