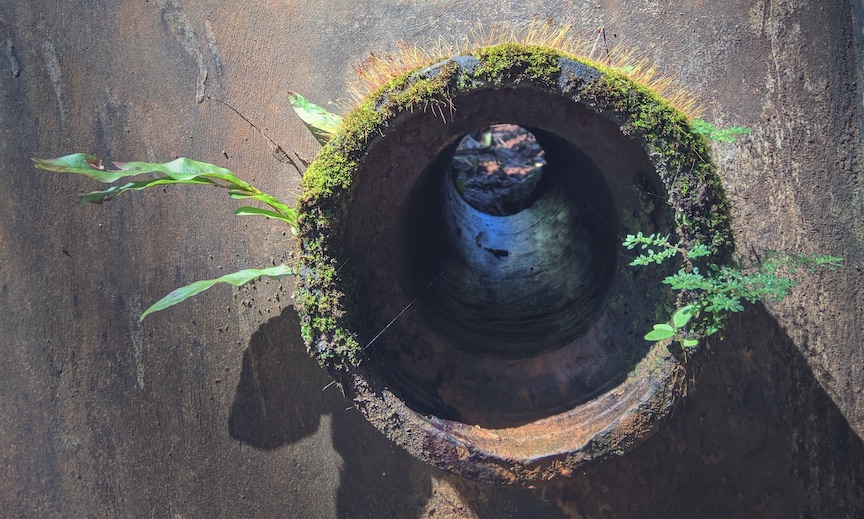 When we describe something as “full of holes,” that means it seems unsound. Like an argument that can’t stand up to logic. Or a shaky alibi that falls apart under scrutiny. Or a half-baked plan that fails to address how we’ll meet variables and unknowns.

Like a vessel that can’t hold water, something full of holes is bound to fail to do what it’s supposed to do.

I remember a dinner party conversation with someone who was working in Risk Management for a large company a few years ago. It wasn’t a field I knew anything about, so I asked him what that even meant, “risk management.” He described it like a stack of Swiss cheese slices:

Each slice represents a safeguard against something going wrong. The individual pieces do have holes in them, so at every step there’s always the possibility of some undesirable occurrence, some unforeseen problem or variable. But the more slices of cheese you have, the more checks on the system you’ve put in place, the less likely it is that all the holes will line up to allow a negative outcome to slip through the entire stack. Risk Management is about putting together enough system-checks and safety measures in a way that the holes don’t line up, and nothing untoward happens.

In Risk Management, anything that doesn’t go according to plan is called an “event.” The game is avoiding events. Trying not to let anything slip through all the holes, not letting anything interrupt the operation. Stopping the unexpected before it can happen. Perpetuating the status quo.

That made sense to me. I’m a visual learner so I liked the Swiss cheese metaphor.

And I can recognize the ways that I’ve stacked together my own “slices” to keep my life chugging along without too many unwelcome interruptions. To keep things from going sideways, I rely on calendars and to-do lists… daily and weekly routines… over-communication to be 100% sure that I’ve made myself clear… setting careful boundaries with other people… well-practiced techniques for deflecting discomfort and avoiding conflict in most instances… fretting and worrying and making contingency plans… rehearsing difficult conversations in my head beforehand to prepare for them… I do a lot of Risk Management. I think most of us do.

We do it on autopilot. Minimize the unexpected. Maintain the status quo.

Most of the time, this is quite useful. It enables us to get things done, to plan and execute with some predictability and efficiency. We don’t have to reinvent the wheel as long as some friggin’ event doesn’t come along.

When the unexpected — an event — does happen, therefore, often it feels like something has gone terribly wrong. It’s an upset. My life is full of holes! I’m failing to do what I intended to do, it’s not going how I thought it was supposed to go. There were too many gaps in the system, too many risks that weren’t identified and managed preemptively. I’d better start plugging up all of these holes with more conditions and certainties and limitations.

But what about when our aim isn’t to avoid an event, but actually to cause an event?

What do we do, then, with all these Swiss slices that we’ve accumulated to avoid the disruption of anything different? We’ve been stacking this cheese all our lives for consistency’s sake — to maintain some sort of functional grip, some measure of creative control, some cohesive sense of self. All of which is necessary insofar as it’s necessary, but is utterly contrary to the new.

We might try to stack our cheese differently, carefully — to line up some of the holes, just the safe holes, the places where we’re willing to allow something fresh and original to seep through. Like, I’ll do it in my spiritual practice, as long as it doesn’t upset the status quo in any other area of my life. I’d like to see fresh possibilities in the realm of prosperity, or world peace, or a transformed relationship with my family, but NOTHING ELSE CAN CHANGE.

Tricky thing is, though, once you move one slice, all the other holes also line up differently, so there’s no telling what might happen.

Or we might try to keep the slices where they are — they’ve stopped the gaps we want stopped — and instead just drill one new hole straight through the entire stack. I’m going to drive this intention through my life into the world no matter what, consequences be damned.

There’s a scene in the movie, Mommie Dearest, in which Joan Crawford is overseeing the total renovation of her New York apartment. The contractor tells her, “It would be nice to have a view on this side, but that bitch of a bearing-wall is in the way.” Joan tells him, “I’ll tell you what you’re going to do. You’re going to tear down that bitch of a bearing-wall and put a window where a window ought to be!” Like that. Tear it down, who cares what it’s holding up!

It doesn’t have to be a rigid (and ultimately futile) attempt to control everything, hoping to affect some particular transformation without changing anything else. I’ve tried that, and it gets stuck real fast — way too many slices in the stack, too much to worry about, one long rut of sameness until something comes in from sideways and knocks it all out of whack anyway.

Neither does it have to mean blowing everything up all at once, undermining the foundational structures that have, indeed, served us and do, in fact, keep things working pretty well most of the time. I’ve tried blowing it all up, tearing it all down. And it’s messy, let me tell you.

What I’d like to offer (and what I’m trying to allow in my own life) is: MORE HOLES.

More uncertainty. More variables. More risk. More freedom. Not having the answer. Not knowing what comes next. Not letting my intentions barrel over others.

This may mean fewer slices in my stack, letting go of some of the old mechanisms that I used to think I needed to keep the unexpected from happening. It may involve poking some new holes. In any case, it’s not in order to control the outcome. Rather, it’s about allowing something new to show up.

It’s about making room for miracles, epiphanies, and other divine surprises.

Maybe being full of holes is what lets in the light, lets out the creative flow, lets through the possibility of our anything and everything our hearts desire…

I can’t wait to be with you this Sunday, August 14. 10:00 am at Maple Street Dance Space, with the inimitable Patty Stephens. I’m thinking maybe Patty and I should form a musical spiritual duo called the Glory Holes.