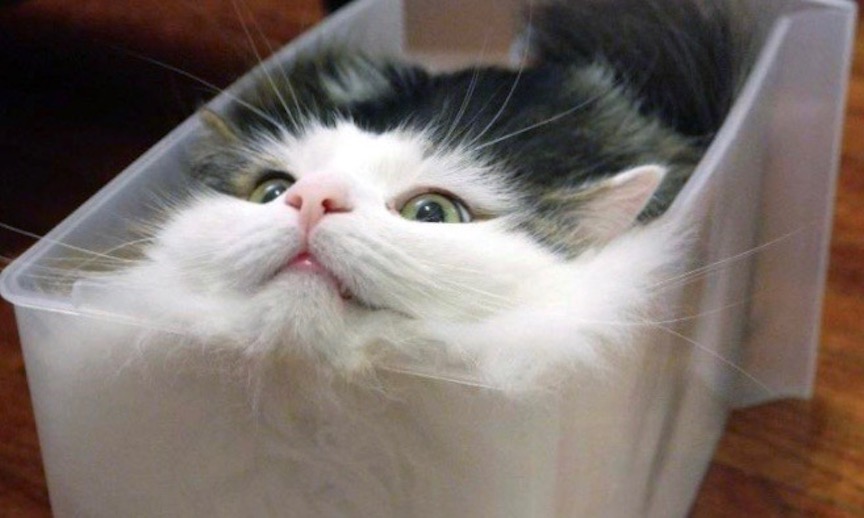 Our one-year-old kitty, Danny, was a skinny little guy when he joined our family six months ago.  His Instagram handle is “Little Danny Cat,” in fact, because he seemed so bitty compared to his mature sister-aunties, Val and Flo.  That nickname doesn’t suit him quite as well anymore; he’s plumped up.

One of his favorite hangouts is on the front porch, watching the driveway.  He used to sit there in a terra cotta pot that also contained a healthy asparagus fern.  He would plop himself right on top of the plant.  I thought it looked uncomfortable because the asparagus fern was sort of sharp and spiny.  But he liked it.

Over the months, the plant struggled to survive as Danny became more voluminous, insisting still on lounging atop it.  It dropped most of its fronds; poor fern.

A few weeks ago, Big Dan was trying to squeeze his ample bottom in the dirt patch that was formerly our lush houseplant.  But he had grown too large.  He knocked the pot onto the floor, shattering it.

After, he seemed loathe to sit by the window without something to contain him there.  He’d gaze at the empty shelf with longing, sometimes meowing a little, glaring at us with some inscrutable mixture of sadness, confusion, and accusation.  But he wouldn’t go where the fern had been.  We didn’t have another flowerpot, not one large enough, anyway.  Travis found for him a little plastic bin, sort of a shelf-organizer.  It was too tight, like the pot before it.  Nevertheless, he finds a way to curl into it snugly.

He spends most of his days and evenings there.  There are broad expanses of furniture on which he could sprawl.  There is a window-seat upstairs that seems to me like an ideal perch, but nobody will use it.  Some cats just like their spaces small.

As we enter the fourth month of semi-quarantine, I feel the walls closing in on me,  I’ve been noticing Danny crowded into his little plastic basket, with a leg or two, or his head, hanging over the edge, and I think, “I know just how you feel, Buckaroo!”  Except that he’s content.  And the truth is I’ve got plenty of space.  We’ve got a yard.  I can go out for long walks to stretch my legs.  So physical distancing has not cramped or cooped me much, in reality.  But still I’m claustrophobic with the relentless same-ness of these walls, these city blocks, this routine.

In talking to others lately, I am hearing more and more people express feelings of cabin fever, impatience, and restlessness.   Even as some venues reopened, and people have begun to congregate (carefully, I hope), we are constantly reminded of the constraints and limitations that define our movements and spaces now.  It’s even more frustrating to discover that just a little relaxation in vigilance has proved reckless and resulted in a  resurgence of viral infections.  So back to our tiny bins we go…  Many people are angry.  And a lot of us are depressed.

But what occurs to me is:  though we may be aggravated by this physical constriction, most of us most of the time are pretty comfortable with narrow, little organizing bins for our emotions, beliefs, and ideas.

Or — maybe it’s more accurate to think of it this way — we don’t like it much when someone imposes on us (or even recommends) restrictions of any kind, physical-mental-emotional-spiritual, but we sure are good at settling snugly into them, unconsciously, on our own.

That’s pretty much just like Danny.  Let me tell you, if I tried to make him go into a tiny container, his claws and teeth would become vicious blades and he’d yowl so you’d think he was being skinned alive.  If it’s his idea, though… if he chooses to get in a box… well, then it’s the best idea in the world and the only place to be.

I can’t wait to be with you, friends.  We’ll have new content online this Sunday, at BOSQUECSL.ORG, VIMEO.COM, and FACEBOOK.   Happy 4th of July!  Be safe.  XO, Drew

I was watching a documentary series about near-death experiences this week.  It’s a subject that…

A few days ago, I was on my way home from a walk around Roosevelt…