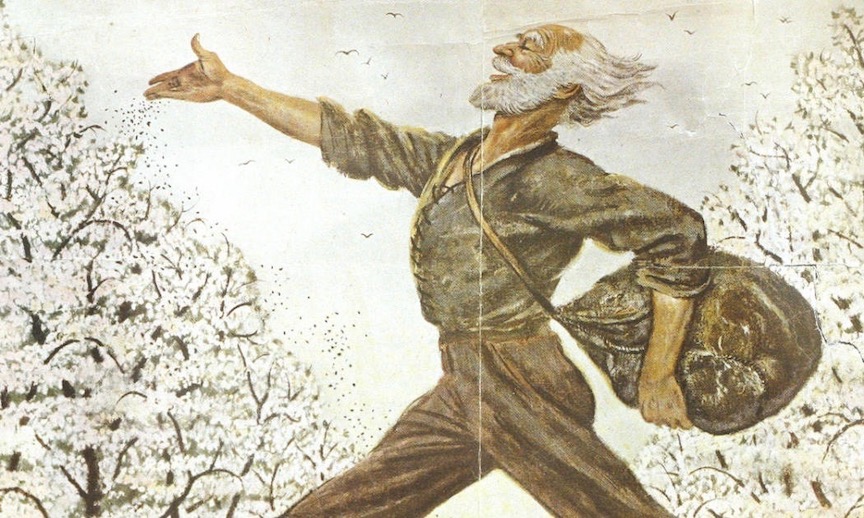 My solitary rumination has led me into some surprising associations these days, letting my mind wander into old memories as I take long walks or reorganize the junk drawers.

A few weeks ago, for the first time in my life, I bought a butternut squash.  Because, why not?  It sat on the kitchen counter for a long while before I figured out what to do with it.  Every time I passed and saw it waiting there, I got the word, “butternut,” stuck in my head.  Eventually, it triggered a recollection of my mother referring to my father, whose name was Robert, as “Bobby Butternuts.”

The nickname struck me as uncomfortably suggestive, so I called my brother Joe to find out if he remembered this, too, and if he knew what it meant.  He did.  Here’s the story:

When we were growing up, a big old butternut tree grew on the back edge of our yard.  I think it was the neighbor’s tree, but maybe it was ours, I don’t remember.  In any case, its branches hung over my Dad’s garden and dropped nuts into the rich soil all season long, where they would sprout and grow healthy new trees amongst the rhubarb.

Butternut trees (also known as “white walnuts”) have become pretty rare, in the northeast at least, because of a fungal disease known as butter-nut canker.  But this one was in great shape.  Dad loved all plants, especially the vulnerable.  He was loathe ever to let anything die or go to waste, so he devoted himself wholeheartedly to saving the little treelings appearing in his garden.  He potted and tended each one until he could find it a new home.

My parents’ friend, Sy, heard about Dad’s propagation project.  He asked if he could have some to plant on his own piece of land.  Dad was most enthusiastic.  Together, he and Sy hatched a plan to rescue this endangered species and repopulate upstate New York, beginning with Sy’s property.  This went on for some time, years maybe:  Dad reverently tending each shoot until it could be transplanted to his buddy’s place.

Sy noted that my father was something of a modern-day Johnny Appleseed — invoking the early-19th century folk hero and pioneer nurseryman who introduced apple trees to the interior and midwest.  When she heard this, my Mom, ever droll, quipped, “Johnny Appleseed?  More like ‘Bobby Butternuts.’”

Later, when Mom would recall this story with a naughty smirk, the name Bobby Butternuts became a bit of a double entendre.  At least, in my recollection it did.  Which is probably why the phrase became seared into my subconscious and decades later I couldn’t look at a squash without thinking about it.  Not quite Freudian, but closer than I’d like, honestly.

I have no idea how many, if any, of those trees planted by Dad and Sy survived and went on to produce their own nuts.  I’d like to believe that the intention set by these two men ultimately will beget generations of new forests.

But truly I don’t need to know the specific, measurable outcomes of their actions to know that they made a difference.  Their care mattered — to some trees (whether a few or a million), to the earth in which they were planted, and to the entire ecosystem.  My Dad’s passion and commitment made a clear difference for me, through this and countless other ways, creating who I am today.  Dad and Sy continue to change the hearts and minds of anyone touched, amused, or inspired by their audacious and beautiful vision of butternut groves across Otsego County.  And Mom made a difference by naming the story and its hero.

These are some of my thoughts this Passover, heading into Easter Sunday, while the world comes into fresh bloom.  I’m thinking about rebirth and everlasting life — our legacy, each and every one of us.  I’m thinking about making a difference, in great ways and small.  We can’t possibly know all the cascading effects of all our being and doing.  But we can be confident that it does indeed matter that we’re here.  We make all the difference in the world, right now and forever.

Join us online this Sunday, April 12, at BOSQUECSL.ORG or on Facebook.  With songs by Patty Stephens and a reading by Lucy Gilliland.  And with so much love to you and yours, my friends –

CLAP ON CLAP OFF

At the start of our online ballet-afrique dance class a couple of weeks ago, my…

My first memory is of my father.  It was a little over a month before…

SMACKED UPSIDE THE HEAD BY AN ANGEL

A few weeks ago, I wrote about a yard sign supposedly translated from Chinese, with…