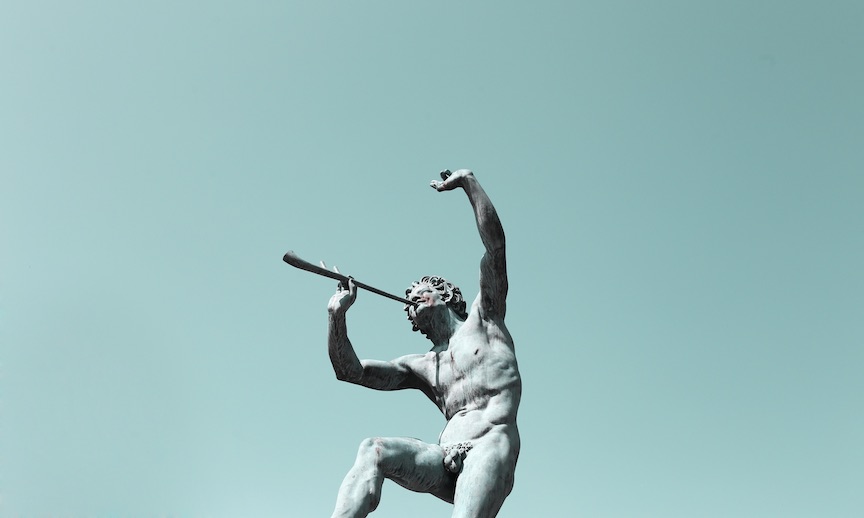 Recently, I read a review of an exhibition currently on at the Metropolitan Museum of Art in New York. The show is called, “Chroma: Ancient Sculpture in Color.” It places pieces from their extensive collection of ancient Greek and Roman statuary alongside reproductions that have been painted to look how they did when first created.

The reviewer, Phillip Kennicott for the Washington Post, asks: “What if the ancient Greeks and Romans actually had terrible taste?”

Today, we’re familiar with statues like these in white marble or patinaed bronze, elegant and clean. They seem archetypal — the epitome of what they represent, the pure form of a being — the ideal. Back in their day, however, when these statues were new, they were almost always painted, sometimes gilded. They were very colorful. Garish, even. And now, based on analysis of tiny pigment fragments, scientists and scholars are able to recreate how the sculptures truly appeared when they adorned the public spaces, palaces, and temples of B.C. Athens and Sparta.

To modern viewers, the results might seem tacky, writes Kennicott. He notes that in color these majestic figures become cartoonish, seeming less-alive than their counterparts in plain stone. A swath of gracefully draped fabric, a miracle in marble, reads more like cheap lamé once painted. The expressions on their faces appear goofy and crude. “The eyes connect the figure more to the world of waxwork displays and animatronic figures… too eager to please, too urgent in their efforts to dupe us into believing they are real.”

I found this pretty fascinating. How the empty eyes of a monochromatic stone carving — the details worn away by millennia — can seem more sophisticated, more beautiful, more alive, and more real than the attempt to render it more completely with paint and color.

Solid bronze or marble invokes a powerful Olympian goddess — commanding adoration, tribute, and worship. In color, she looks like she might be more at home as part of the “It’s a Small World” ride at Disneyland.

It’s got me thinking about how most of our ideals tend to be more attractive and appealing as vague outlines than they are as filled-in reality. Actualizing them can lead to disappointment. Whether we’re idealizing the past with nostalgia — our memory of the ugly, tacky parts fading with time. Or idealizing the future — the purity of a vision as-of-yet unencumbered by actuality. Ideals are, by definition, perfect. Reality is always messier.

That’s the trouble with reality — it is complicated, ambivalent, human, perpetually incomplete, and constantly changing into something else.

It is also the great gift of reality — we get to revel in its rich complexity, wonder at its contradictions, become ourselves through its twists and turns, and contribute creatively to its relentless emergence.

The Science of Mind relies heavily on philosophical idealism. The gist is that if we can hold a Perfect Vision — the “Divine Idea” — if we can declare and describe It, and act in accordance with It, our embodiment and actualization of It into the world will follow naturally. This is lovely. I don’t disagree. I do think it’s important to remember, though, that the actuality of it, the reality of it, usually turns out rather differently from how we imagined it would.

This isn’t a bad thing. As we actualize our lives, we are personalizing the Ideal. We are individualizing the Divine Idea, especially for this time and space, especially for and as us. If we aren’t wild about it and how it’s turning out so far — good news! — we get to participate in creating everything that comes next.

I’m calling this talk, “The Trouble With Reality,” but I mean that ironically. Because reality is only a problem if we relate to it like there’s something wrong with its messiness, with the ways that it doesn’t look like exactly like our purest ideals, with how it involves other people and their damnable, complicating counterpoints to our intentions…

I don’t mean to discount our world of troubles — we’ve got ‘em for sure — we’ve got lifetimes of ‘em. I’m just saying that we’re here to engage with them, to reckon with them honestly, to recognize the gap between what we believe to be possible and what we’ve done thus far. And as we reach for quintessence, to keep relating powerfully to reality not as what’s wrong but as what’s so.

I can’t wait to be with you this Sunday, September 4, 10:00 am at Maple Street Dance Space. Sasha Menendez will be our musical guest! XO, Drew

Earlier this week, Travis and I were grumbling about something annoying, and he said, “If…