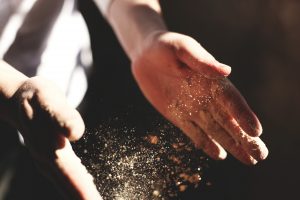 A koan is a Zen paradox that prompts one into limitless contemplation on the path of enlightenment.  I dig koans, in part because they tend to slip away from certainty, refracting into myriad unanswerable questions, onward and deeper.

For example, the famous koan, What’s the sound of one hand clapping? eventually invites us to start asking things like:  What’s it clapping on or against? Who’s listening?  For that matter, who’s asking?

I try to remember that rarely is there only one answer to most good questions.  But I hope that in our exploration, when someone asks, “What’s that sound?,” we are bold enough to venture:  Me.  It’s liberating and empowering to declare ourselves, our own participation, our voices in this thing called Life.

I’m clapping; we’re clapping.  I’m listening; we’re listening.  This hand; these hands.  You, me, us.